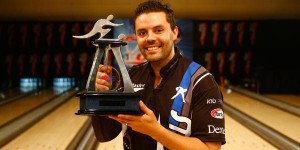 Social media networks are abuzz as tributes flow across the world in response to today’s momentous win by Australia’s Jason Belmonte of the coveted PBA PLAYER OF THE YEAR award.
The accolade caps his stunning rise to stardom in the professional ranks of tenpin bowling that began as 2009 Rookie of the Year and includes seven PBA titles, including the prestigious USBC Masters.
“It’s humbling and it feels so bloody good,” Belmonte quipped online as he summed up his emotions on achieving this pinnacle career achievement.
Renowned and now widely emulated for his unorthodox two-handed delivery Belmonte joins Venezuela’s Amleto Monacelli and Finland’s Mika Koivuniemi as the only non-US players to win the PBA’s highest annual competition honour. He is also the first two-handed player to win the award which was inaugurated in 1963, twenty years before Belmonte was born in the regional city of Orange, New South Wales.
“This award has a lot of meaning for me because it represents the fact that you can do it your way and be successful,” Belmonte said. “I’ve taken a lot of criticism but I’m a firm believer in pinning your ears back and going for your dreams,” he added.
Jason Belmonte is recognised as one of the most charismatic and influential figures in international bowling. He has amassed innumerable amateur and pro titles on five continents and has twice been named World Bowling Writers BOWLER OF THE YEAR – initially in 2005 when he was the first Australian male to win that award and the youngest male bowler ever to be honoured by the world’s bowling media, and again in 2008.
Belmonte was presented with his latest award at Michigan’s Thunderbowl Lanes where the Barbasol PBA Tournament of Champions* gets underway this evening, local time.
The 2012-2013 Chris Schenkel PBA Player Of The Year Award was the culmination of an expanded 14-month campaign that began in November 2012 and ended on 31 December, 2013, as the PBA returned to a traditional calendar year season that began on 1 January this year.
Further details can be found at www.jasonbelmonte.com, www.pba.com, Facebook, Twitter and Instagram.
ends

* Editors’ Notes: Bowling fans will be able to observe bowling through the eyes of Australian two-handed star Jason Belmonte during the Barbasol PBA Tournament of Champions when he wears Google Glass during the opening round of qualifying at Thunderbowl Lanes in Allen Park, Michigan, on 18 January.

“I want to show viewers a point of view that no other sport has the ability to show at the highest level of competition. You couldn’t have a quarterback wear Google Glass in the NFL because when he got tackled it would break. With the PBA, with all the cameras we can place on sets, we simply have never been able to see through the athletes’ eyes. Well I am going to give viewers that opportunity,” he said.
Google Glass is a “wearable computer” which features a head band frame that includes a digital camera capable of recording 720 dpi video, 16 GB of memory and voice recording technology. It operates like a hands-free smartphone.

The PBA will record video of one game through the eyes of Belmonte from the first round of TOC qualifying. The Google Glass viewpoint will then be posted on PBA’s exclusive online bowling channel, Xtra Frame so Xtra Frame subscribers can click on the download whenever they want to watch the game as Belmonte sees it.
Belmonte also was wearing Google Glass when he bowled a 300 game during league play in the Wednesday Night Doubles at his family’s Orange Tenpin Bowl in Orange, New South Wales, Australia, a week before Christmas. He recorded the game and posted it on YouTube, where it has been viewed by thousands of YouTube visitors.

For further information, please contact Lynne Clay
at lynneclay@bigpond.com or +61 419 444 280